We are specialists in safe non-surgical treatments to enhance your natural beauty. All the treatments offered are carried out by professionals trained specifically in the procedures offered.

There are several different types of dermatitis. The different kinds usually have in common an allergic reaction to specific allergens. The term may describe eczema, which is also called dermatitis eczema and eczematous dermatitis. An eczema diagnosis often implies atopic dermatitis (which is very common in children and teenagers) but, without proper context, may refer to any kind of dermatitis.

In some languages, dermatitis and eczema are synonyms, while in other languages dermatitis implies an acute condition and eczema a chronic one. The two conditions are often classified together. 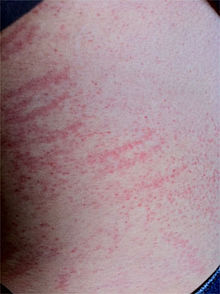 Dermatitis symptoms vary with all different forms of the condition. They range from skin rashes to bumpy rashes or including blisters. Although every type of dermatitis has different symptoms, there are certain signs that are common for all of them, including redness of the skin, swelling, itching and skin lesions with sometimes oozing and scarring. Also, the area of the skin on which the symptoms appear tends to be different with every type of dermatitis, whether on the neck, wrist, forearm, thigh or ankle. Although the location may vary, the primary symptom of this condition is itchy skin. More rarely, it may appear on the genital area, such as the vulva or scrotum.  Symptoms of this type of dermatitis may be very intense and may come and go. Irritant contact dermatitis is usually more painful than itchy.

Although the symptoms of atopic dermatitis vary from person to person, the most common symptoms are dry, itchy, red skin. Typical affected skin areas include the folds of the arms, the back of the knees, wrists, face and hands.

Dermatitis herpetiformis symptoms include itching, stinging and a burning sensation. Papules and vesicles are commonly present. The small red bumps experienced in this type of dermatitis are usually about 1 cm in size, red in color and may be found symmetrically grouped or distributed on the upper or lower back, buttocks, elbows, knees, neck, shoulders, and scalp. Less frequently, the rash may appear inside the mouth or near the hairline.

The symptoms of seborrheic dermatitis on the other hand, tend to appear gradually, from dry or greasy scaling of the scalp (dandruff) to hair loss. In severe cases, pimples may appear along the hairline, behind the ears, on the eyebrows, on the bridge of the nose, around the nose, on the chest, and on the upper back.  In newborns, the condition causes a thick and yellowish scalp rash, often accompanied by a diaper rash.

Perioral dermatitis refers to a red bumpy rash around the mouth.

A number of health conditions, allergies, genetic factors and irritants can be responsible for causing dermatitis. There are several types of dermatitis which are distinguished based on the factor that triggers the skin reaction.

This specific type of dermatitis can also be caused by the exposure to allergens such as:

Individuals develop this condition due to a brief exposure to the allergen or to a prolonged exposure to an irritant, such as those mentioned above. Generally, people who become sensitive to an allergen will be allergic to it for the rest of their lives.

Another type of dermatitis, seborrheic dermatitis, is usually caused by physical stress, neurological conditions such as Parkinson’s disease or by traveling. Varicose veins and chronic conditions or infections that affect the blood flow in the legs account for potential causes of stasis dermatitis.

The cause of atopic dermatitis is not known, but the disease seems to result from a combination of genetic (hereditary) and environmental factors. Usually, irritated skin, a poor immune system and a genetic factor are included among the causes of this condition. Although stress does not cause this type of dermatitis, it has been proven to worsen it. Not least, makeup, moisturizers, topical corticosteroids and dental products that contain fluoride may cause perioral dermatitis.

Dermatitis herpetiformis is caused by a gastrointestinal condition called celiac disease. Celiac disease often results after the ingestion of aliments that contain gluten.” ”>