We are specialists in safe non-surgical treatments to enhance your natural beauty. All the treatments offered are carried out by professionals trained specifically in the procedures offered.

Reflexology, or zone therapy, is an alternative medicine involving the physical act of applying pressure to the feet, hands, or ears with specific thumb, finger, and hand techniques without the use of oil or lotion. It is based on what reflexologists claim to be a system of zones and reflex areas that they say reflect an image of the body on the feet and hands, with the premise that such work effects a physical change to the body.  A 2009 systematic review of randomised controlled trials concludes that

“The best evidence available to date does not demonstrate convincingly that reflexology is an effective treatment for any medical condition.” 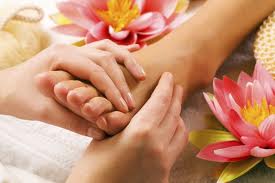 There is no consensus among reflexologists on how reflexology is supposed to work; a unifying theme is the idea that areas on the foot correspond to areas of the body, and that by manipulating these one can improve health through one’s qi.Reflexologists divide the body into ten equal vertical zones, five on the right and five on the left. Concerns have been raised by medical professionals that treating potentially serious illnesses with reflexology, which has no proven efficacy, could delay the seeking of appropriate medical treatment.

The Reflexology Association of Canada defines reflexology as:

“A natural healing art based on the principle that there are reflexes in the feet, hands and ears and their referral areas within zone related areas, which correspond to every part, gland and organ of the body. Through application of pressure on these reflexes without the use of tools, crèmes or lotions, the feet being the primary area of application, reflexology relieves tension, improves circulation and helps promote the natural function of the related areas of the body.”

Reflexologists posit that the blockage of an energy field, invisible life force, or Qi, can prevent healing.Another tenet of reflexology is the belief that practitioners can relieve stress and pain in other parts of the body through the manipulation of the feet. One claimed explanation is that the pressure received in the feet may send signals that ‘balance’ the nervous system or release chemicals such as endorphins that reduce stress and pain.These hypotheses are rejected by the general medical community, who cite a lack of scientific evidence and the well-tested germ theory of disease.

Reflexology’s claim to manipulate energy (Qi) has been highly controversial, as there is no scientific evidence for the existence of life energy (Qi), ‘energy balance’, ‘crystalline structures,’ or ‘pathways’ in the body.